Everything Old is New Again

Workshop Built Ventilators
I return to something I mentioned in an earlier post about homemade (wooden) iron lungs described in a 1950s Popular Mechanics article. the link under the picture will take you to a site that posts the original complete assembly plans.

Intended only for emergency use until a commercial respirator could be obtained, this “wooden lung” was designed by engineers and built by a volunteer group under the supervision of Dr. Gerald M. Cline, Dr. Homer O. Dolley, and Sister Celine of the medical staff of St. Joseph’s Hospital, Bloomington, Illinois. On completion, the unit was put into immediate use in emergency treatment of eight-year-old Rudy Landheer, a victim of polio in the epidemic of 1949. The original unit did emergency service for 12 hours until a conventional iron lung could be obtained. 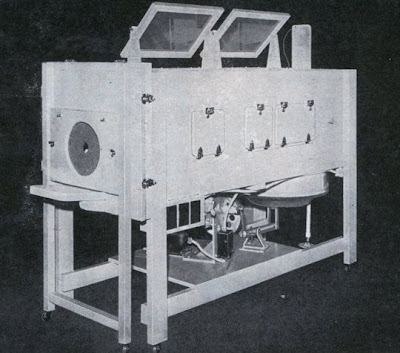 Popular Mechanics Jan 1952 Emergency Wooden Iron Lung
I will also talk about some of the earliest positive pressure ventilators built in Great Britain and home made iron lungs used in the United States.

This is the Newcastle ventilator. (Known as a respirator at the time.) Just as we named our ventilator “Vinnie”, they named the ventilator they designed and built. They named theirs “Mother”. 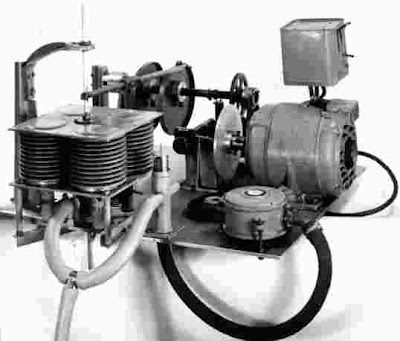 "Mother"
The electric motor was controlled by mercury switches. A spinning disc allowed speed variation, and a camshaft moved four small bellows up and down to provide the ventilation.

After the success of their first ventilator design they wanted to design another that could be easily and cheaply and quickly constructed by any able technician. They were building these ventilators to save lives in the polio epidemic. There simply were not enough “iron lungs” available in Britain to deal with this epidemic. There were about 1000, but many of these were already in use. There were 1000 cases of polio in 1946 in England and Wales, but this increased to 9000 by 1947. The use of a ventilator could reduce the death rate of those polio victims that were afflicted with respiratory paralysis from 90% to 30%.

One version of a cheap and easy to build ventilator was the Bang ventilator of 1953. This design was shared with others and similar units were built elsewhere. 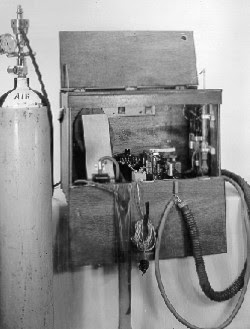 The Newcastle "Bang" ventilator
The “Bang “ ventilator design worked well, but it required frequent adjustment and maintenance. The mercury switches it used were important for anesthesia, but were not required for polio patients. They could also be difficult to obtain.

They then built two prototype "polio ventilators" out of materials that were readily available in any workshop. The “blow” side of a domestic vacuum cleaner powered these ventilators. Up to 10 ventilators could be powered from one Hoover. 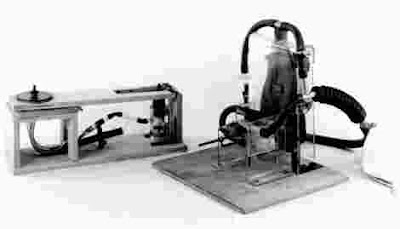 Two Polio Ventilators
These ventilators were made of plywood and perspex. The one on the left, used a magnet to operate its main valve. Inflation pressure was varied by adding weights onto the hinged flap on top much as we do with our design. There were no electronic controls and alarms. Cycling was controlled by regulating the leak out of the plastic bag under the flap. When the bag emptied, the magnet lowered and opened the main valve, allowing inspiration until the bag had filled enough to again lift the magnet from the valve, which would then shut until the bag was empty again

The device on the right used the "flick over" rocker from a light switch as a main switch which opened and closed a piece of tubing to allow gas flow. Inflation pressure was varied by altering tension in springs rather than by using weights, while controlled gas leak was still used to control cycling.

Both these devices split the inlet air, from the vacuum cleaner, to both the patient and the control bag. The expansion of the bag triggered the main valve that stopped the flow of air and allowed expiration. 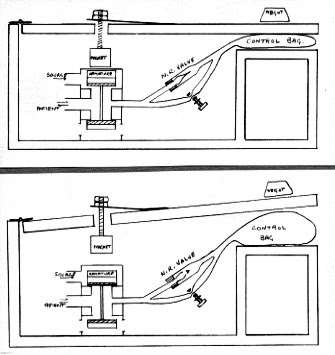 The inspiratory and expiratory phases of the wooden polio ventilator
Above is a more functional diagram of one of the “Polio” ventilators. These devices seem incredibly crude by today’s standards. Even with the most basic of control systems and electrical valves, a far more sophisticated and reliable system can be constructed today. The people that designed and built these early ventilators were very inventive, brave and capable. They saw the need for ventilators during the polio epidemic and did whatever was required, in order to supply them. Although these units seem crude, they, and others like them saved many lives that would have been lost.

These early ventilators were followed by many more, for both adults and infants. "Home made" ventilators of all shapes and sizes were used for another thirty years at the Royal Victoria Infirmary.


In America, the polio epidemic also caused a large demand for ventilators. There was more demand than could be supplied by the existing stock of "iron lung" negative pressure ventilators.

An Iron Lung ward filled with polio patients. 1953
Rancho Los Amigos Hospital, Downey California
During the height of the polio epidemic years, the iron lung became such a crucial part of treatment that Philip Drinker and Edgar L. Roy offered instructions for building a makeshift emergency ventilator for cases of life-threatening paralysis. Although this emergency version of an iron lung was only intended for use until a board-approved version arrived, it was functional enough to save lives. 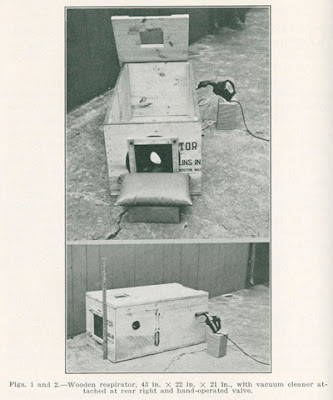 Image of an emergency ventilator, from the article by Drinker and Roy.
In contrast to the original, professionally crafted iron lung of 1929, Drinker and Roy employed common household and conveniently available hardware store materials in their emergency respirator. The materials included a car inner tube for a rubber collar, a common vacuum pump to provide pressure, a six-inch square piece of double-thick glass, a piece of sole leather to serve as the valve, a glass U-tube with colored water to show pressure, and several pieces of spruce wood. Drinker and Roy provided detailed construction plans and clearly indicated that it was an emergency respirator that could only accommodate small children and was not meant to replace the standard-size iron lung. Nonetheless, they fully supported its use in emergency situations 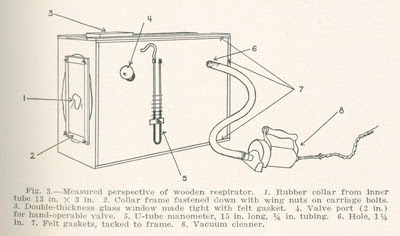 You can see these and more at :


Here is a personal account of a homemade ventilator quickly built and used to save the life of a child
Posted by Dreamer at January 27, 2008

Seed Newsvine
Save This Page