A Home Made Iron Lung for the Hospital for Sick Children

I had some previous postings on home made iron or “wooden” lungs from the 1950s and 1940s. Here is a story of some home made ventilators built by the Hospital for Sick Children in Toronto Ontario to deal with the 1937 polio epidemic. It amazes me how the very same ethical dilemmas regarding shortages of ventilators we may face in an influenza pandemic were forced on these people in the 1930s.

Toronto during the past fortnight was also the scene of some mechanical ingenuity. Hospital for Sick Children had only one mechanical respirator, and needed at least one more. The only professional manufacturers of this life-saving device are: Warren E. Collins, Inc. of Boston, which makes respirators designed by Professor Philip Drinker of Harvard's School of Public Health; and J. H. Emerson Co. of Cambridge, Mass., owned by John Haven Emerson, inventive son and namesake of New York City's onetime commissioner of health. The two companies long quarreled over patent infringements. Meanwhile, since 1929 only 250 Drinker respirators have been manufactured (price: $1,350 to $2,450), and since 1931 only 30 Emerson respirators (price: $1,000 to $1,600). Neither firm keeps many respirators in stock.

Faced with these conditions, Superintendent Joseph Henry Winteringham Bower of Toronto's Hospital for Children, a civil engineer by training, fortnight ago determined to build a duplicate of a Drinker respirator. All that was required was an airtight container out of which air could be intermittently pumped to inflate the patient's lungs, Superintendent Bower summoned his chief engineer, Harry Balmforth, and his carpenter William Hall. With pine boards, three hinges from a trunk, some metal rings, a rubber sheet, an air hose and a vacuum pump, they did the job. The work took only seven hours The cost was negligible because they used any old thing available. Before this "wooden lung was long in use. Denver set up a wail for a respirator. Two little girls there were taking turns dying without aid of the city's only respirator. Toronto heeded the plea, sent the wooden device. In spite of its use, one of the Denver children died.

Last week Messrs. Bower, Balmforth and Hall, with money provided by the Ontario government, were busily building six steel replicas of their wooden respirators. Final cost for each respirator will be less than $500.

Here is another account, from “The Middle-class Plague: Epidemic Polio and the Canadian State, 1936-37” by Christopher J. Rutty.

The Toronto press focused considerable attention on the need for more life-saving iron lungs as the 1937 epidemic worsened through August. The emergency was leaving "little tots struggling for breath" in hospitals. HSC’s single Drinker machine was used for a small number of mild chest paralysis cases, but on 21 August, a young girl in critical condition was placed in the lung, which happened to be open, but it was clear that she would have to remain in it for a long time. She would then have to be "weaned" off the iron lung when evidence of recovery was clear and periods outside the iron lung could then be progressively lengthened. This situation greatly concerned HSC’s Superintendent, Joseph H.W. Bower. The City of Toronto had ordered one commercial machine for Riverdale Isolation Hospital. London and Hamilton had also ordered lungs. Yet it would be several days at least before Riverdale’s lung arrived, and it would be ten days to two weeks before another one would be available. With this news, Bower knew he would have to build respirators at the hospital for any bulbar cases that might develop.

Meanwhile a four-year-old boy had been admitted with chest paralysis on the morning of 26 August. As the Drinker machine was in use, an experimental respirator for premature infants was modified and coupled with a quickly-built wooden box in which the little boy was placed and stabilized. This "emergency-made ‘lumber lung’" "saved" the child’s life. The boy’s mother then turned to the newspapers to plead for the "wealthy to buy iron lungs," each of which was worth some $2,000. The prominent place of this appeal in the Toronto press reflected the unusual vulnerability to polio among the well-to-do, whose wealth could not protect them from this disease. Two more commercial "lungs" were eventually bought, largely through an "Anonymous Donor." Meanwhile, at HSC, efforts were concentrated on building more lungs. By noon of 27 August, plans were complete and enough parts were ordered and delivered by the next evening to start assembling the first iron lung. Two days later this first lung was complete and placed on HSC’s Infectious Floor; within fifteen minutes a patient was placed in it. By 31 August, four "homemade" iron lungs had been assembled in the hospital’s basement. 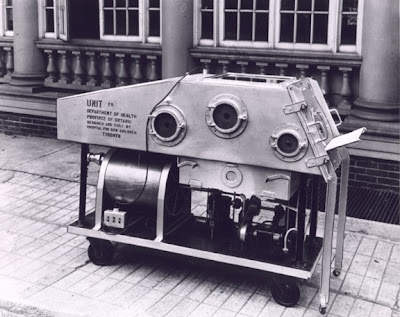 The iron lung symbolized the disease and its worst possible effects while at the same time it provided the medical community with a specific and hopeful technological tool against them. Still, the limited supply and success of iron lungs, especially during the crisis of an epidemic, frequently raised the difficult ethical dilemma of having to decide who to treat and for how long. Nevertheless, the iron lung also gave the provincial government another opportunity to demonstrate that it was doing everything possible against the worst effects of this disease.


Incidentally, the Hospital for Sick Children (Sick Kids) is a national treasure, I know several people who work there and have had one of my own children treated there as well. They still provide first rate care.


In Australia they also built their own ventilators when they could not purchase enough of the Drinker commercial models in 1937. 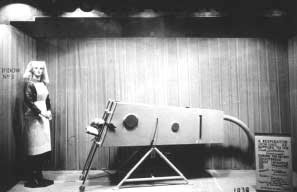 Some Royal Navy men made a ventilator to save the life of a young army officer afflicted with polio in 1944.
Posted by Dreamer at April 26, 2008

Seed Newsvine
Save This Page