Many people have called what I am doing a “MacGyver” approach to supplying ventilators for a possible shortage during a pandemic. In case you are not aware, MacGyver was a character on a TV show. The clever solutions MacGyver implemented to seemingly intractable problems, often in life-or-death situations required him to improvise complex devices. He used knowledge of science and engineering along with a little innovation to build these devices out of whatever materials he had at hand, to free or save the lives of the people he needed to help. Now that I think about it, I don’t think the comparison is too far out.

Last month I was pondering some articles I had read about the treatment of ARDS (Acute Resoiratory Distress Syndrome) in the H1N1 (swine flu) pandemic. These articles said that some of the people that were getting very sick from H1N1 could not be adequately treated using ordinary ventilators. They required the use of HFOV (High Frequency Oscillatory Ventilators) or ECMO (Extra Corporeal Membrane Oxygenation). I researched HFOV and found a published design that I thought could be modified so that people could build these units as emergency pandemic ventilators. http://panvent.blogspot.com/2009/09/high-frequency-oscillatory-ventilator.html
I have more detailed information in my previous post. I also have designs for a more basic ventilator as well.
http://panvent.blogspot.com/2007/03/preliminary-layout-for-open-source.html

When I first heard about ECMO, I thought that surely ECMO must be beyond the scope of the Pandemic Ventilator Project. It is a complex process requiring complicated equipment. I did a little research on it on my break at work. (I work as a dialysis technologist.) As I read about the requirements for equipment to do ECMO, an odd thought occurred to me. Everything that the paper in front of me said I needed to do ECMO was on this machine that was right beside me. That machine is a hemodialysis machine. I did some more searching on hemodialysis and ECMO and found that dialysis is often used in conjunction with ECMO by either using 2 sets of equipment, or just by adding a dialyser to the ECMO circuit, but I could find nothing about actually doing ECMO on a dialysis machine.

I thought, “Now this is an original idea!” I quickly put my thoughts together and posted it as a possible help for pandemic flu sufferers. I contemplated it again later and thought that it may even have some advantages over conventional ECMO in that citrate anticoagulation could be used. I asked for comments on the blog which were mixed, but nobody said they had done it, were considering it, or had even heard of it being done.
http://panvent.blogspot.com/2009/09/using-dialysis-machine-to-do-ecmo.html

Today I did a little more research. This time it was for CRRT (Continuous Renal replacement Therapy) and ECMO. I found something truly amazing. Someone had already thought of this more than 2 years ago and used it to save the life of a child. (Goodbye original idea.) Here is another of those heroes I love, like the people that built ventilators to save the lives of children during the polio epidemic. http://panvent.blogspot.com/2008/01/everything-old-is-new-again.html

This person is Dr Abhay Divekar of the Winnipeg Children’s Hospital Health Sciences Centre. He used his idea of doing ECMO on a dialysis machine to save the life of Keith Porcher. The spokesman for the hospital told a news conference “We felt the baby had no other option, that if this experimental procedure wasn't going to be tried, the baby was going to die." 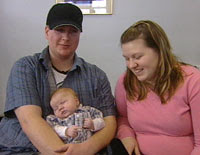 Dr. Divekar, (a true MacGyver, someone should present you with a gold Swiss Army knife) you are a hero in my eyes, and I would love to talk to you some time. I have plans to post a hall of fame page in the future describing every one I could find that built ventilators in an emergency to save someone’s life (most from the polio years). You will definitely be on that page.


So now doing ECMO on a dialysis machine seems much closer to a viable option for emergency use in a pandemic. I even found something about using citrate with ECMO. Vanderbilt University is doing a study on citrate use in babies on ECMO.

CBC radio ran an interview they did with me about the Pandemic Ventilator Project on the Oct 3 episode of White Coat, Black Art. you can get the podcast version here:
http://podcast.cbc.ca/mp3/whitecoat_20091003_21062.mp3

The part about the Pandemic Ventilator Project is at the end.

Here are the links.

JAMA article shows that most patients with severe H1N1 that are treated with ECMO survive
http://jama.ama-assn.org/cgi/content/full/2009.1535